(b) bewegingspatronen in de piste

Stop - The horse is standing in a still position with a straight feet. The horse's head is relaxed slightly below normal.

Backing up – moving backwards in a set number of steps. The horse's head must not get too high, otherwise the movement will seem too stiff.

Leg yield – Feet are positioned towards the inside of the arena while staying on the desired line, leg yield can be performed on the rail or for example in a diagonal line. The hobbyhorse should be flexed very slightly away from the movement.

Shoulder-in – Feet are positioned towards the inside of the arena, flexion also in the same direction. The riders outside shoulder should be slightly forward.

Turn on the forehand – The rider preforms a 180 degree movement with the head of the horse as a pivot point inside the motion. The legs move on two rails and the horse is flexed in the direction of the movement slightly.

Flying change – The rider switches the leading leg of the canter. The flying change is happening in the air, the rider will jump in to the air to take the other leg as their leading leg when they land. The horses head should be flexed slightly to the switched lead and the rider switches the reins to the other hand – the reins should always be on the leading side. Flying changes can be done on every stride on higher levels.

Canter pirouette – A 360 degree motion where the hobbyhorse stick end remains within the movement. The pirouette is started by slowing the canter almost in place and then moving in the direction of the leading leg. The rider's legs are moving on two rails, the leading leg moving in a bigger more upbringing movement and the other leg more inside of the movement in a smaller circle, this leg taking most of the weight of the rider’s body and pushing the movement sideways. The perfect amount of steps in a full canter pirouette is 5-6 steps depending on the length of the rider’s steps. The head of the hobbyhorse is positioned in a very collected position and the flexion of both horse and rider’s upper body is in the direction of the movement. The canter pirouette can also be done in a half-pirouette, the ideal amount of steps being 3. The lead is changed after these 3 steps when the rider is back on the desired line. At the higher levels riders can perform a double pirouette, which require strength and precision, the amount of steps is doubled by the steps in a normal pirouette (10–12 steps). In a test it is not permitted to do more than a double pirouette.

Pirouette in walk – A 360 degree motion, turning on the haunches in full.

Passage – Very collected trot that stays almost in place. A higher level movement, requires strength and stamina. In passage the horse is collected upwards and the leg movement is desired to be flexible, powerful and moving forward at a slow pace.

Piaffe – Like passage but completely in place. Piaffe is a powerful movement, the horse should be even more collected than in the passage. On the Intermediaire-level the minimum is 7 steps, Grand Prix requires 12 steps. A pirouette can also be performed in piaffe, it resembles turning on the haunches, the movement can be done in a full pirouette or a half pirouette. 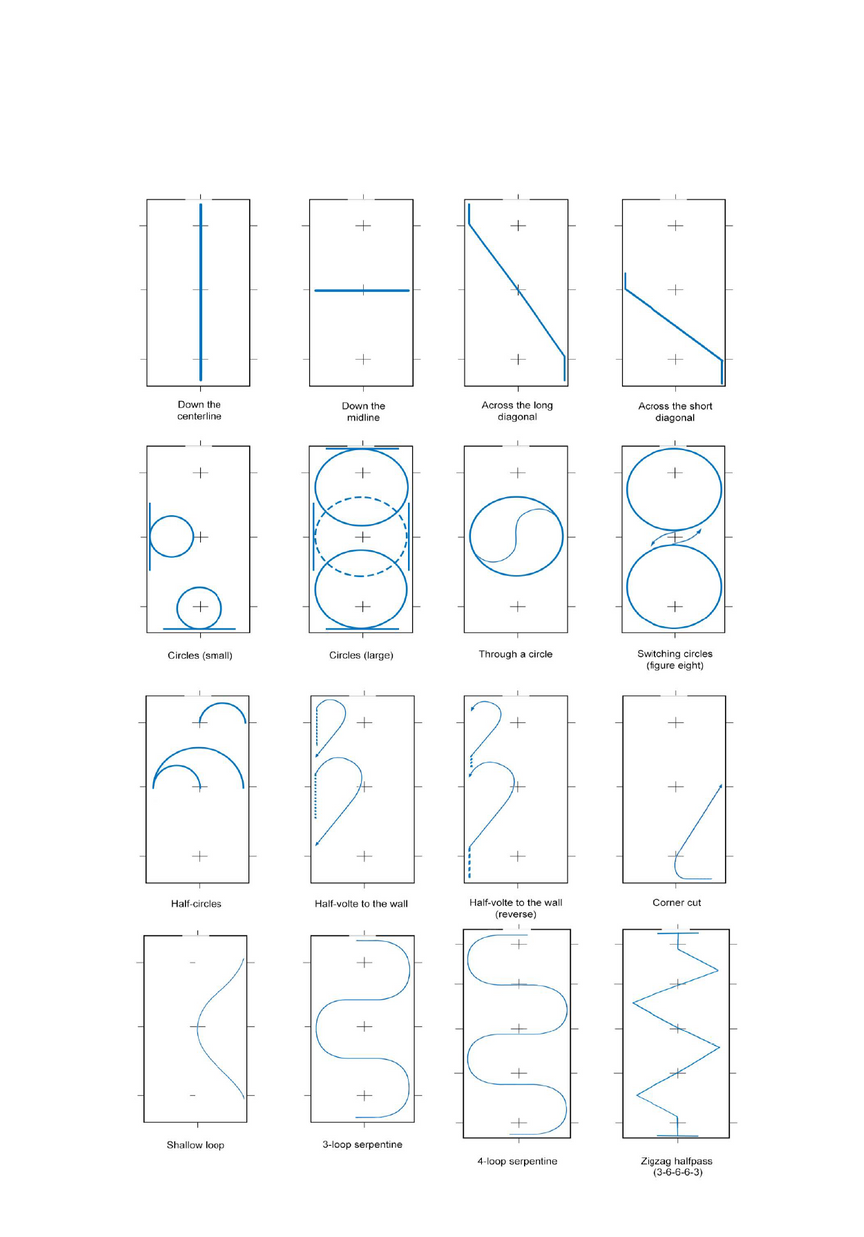